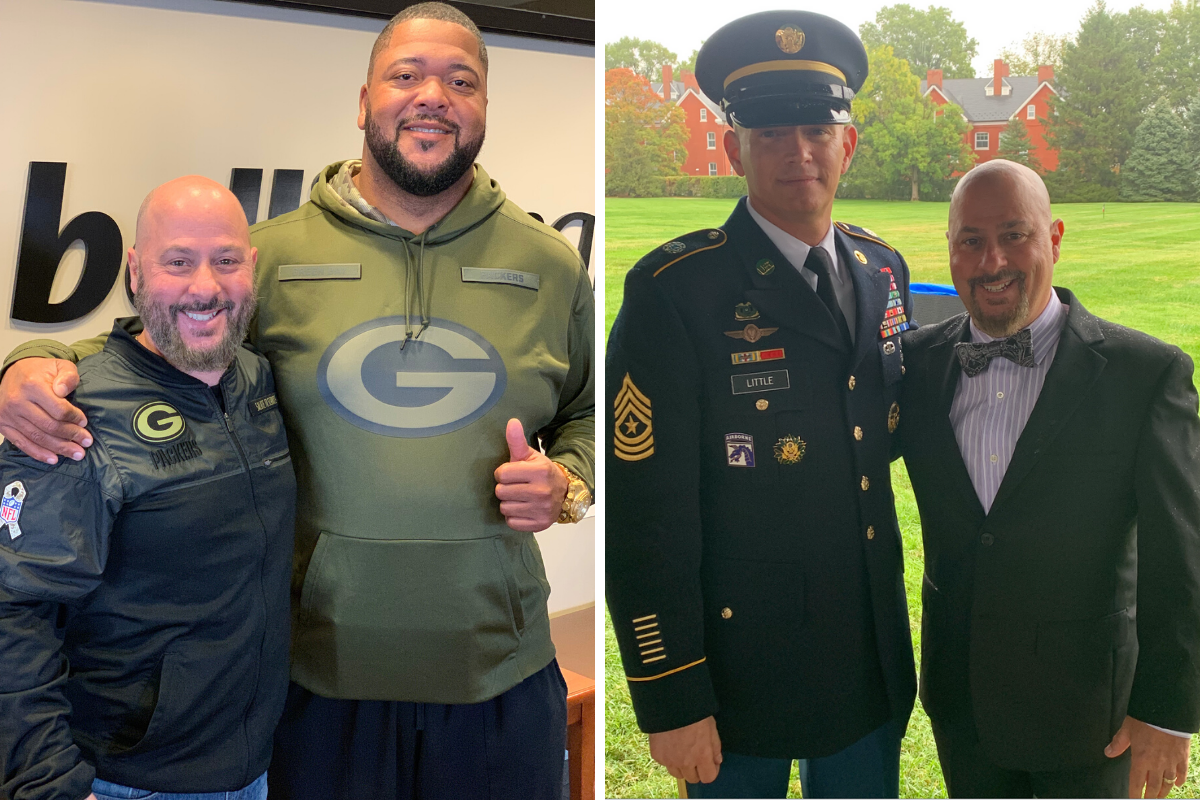 Whether you are a current or former member of the Army, Navy, Air Force, Marines or Coast Guard, November is our country’s time to thank you for your service. The NFL also salutes our nation’s military members during November as well with on-field displays and sideline gear specially made for the coaching staff of all teams.

He recently traveled to Washington D.C. and joined long-time friend Sergeant Major Aaron Little, United States Army and Special Aide to the Chairman of the Joint Chiefs of Staff General Mark A Milley at his promotion ceremony.

In 2013, Mark created Honor Canvas honoring the service of military members and veterans and in 2016 was presented with the opportunity to connect with Never Forgotten Honor Flights.

An affiliate of the Honor Flight Network, a national network made-up of over 100 independent Hubs in 45 states, The Never Forgotten Honor Flight is a Wausau based organization established in 2009 with the simple goal of flying veterans from it’s region to Washington D.C. in order to visit memorials built in their honor.

The Never Forgotten Honor Flight program receives no government funding and is supported entirely via commercial and private donors including civic and veteran organizations, employees of corporations, churches, schools, various foundations. The only qualifying requirement a veteran must meet to participate in an Honor Flight is service during stated time periods and honorable discharge from any branch of the U.S. military. There is absolutely no travel cost to the veteran at all.

During this one day trip veterans and their guardians visit the World War II, Korean, and Vietnam Memorials along with other historical landmarks including Iwo Jima Memorial (Marine Corps War Memorial), Air Force Memorial, Pentagon Memorial, and the Arlington National Cemetary where they have the opportunity to see the Changing of the Guard at the Tomb of the Unknown Soldier.

In 2016 Gannett Media partnered Mayfield Sports Marketing with an opportunity to honor those who had served by sponsoring celebrity athlete John Kuhn to join 98 local veterans on a May 2016 Honor Flight. USA TODAY NETWORK and Gannett Media’s “Honoring Our Freedom” showcased military mail from home from the Civil War through current operations.

“With the success of the Brewers’ Jonathan Lucroy going on the flight in Milwaukee in 2014, we thought it would be awesome to have a Packers player go on a flight. Working with and knowing John, we didn’t make any other suggestions for players to go on the flight. John has always been involved with the Wisconsin communities in a variety of ways. Not only being a huge fan favorite, we knew he would be humbled to take the flight and the journey with the veterans on the flight.” ~ Mark Mayfield, Mayfield Sports Marketing.

During his time with the Honor Flight participants, Kuhn had the opportunity to interview six of them for a half-hour documentary, John Kuhn Honoring our Freedom DVD, about their journey which premiered Veterans Day 2016.

“To sit and have the conversations with the (veterans) I’ve had, it’s really been impressive to hear some of their stories, see the smiles on their faces and see what this truly means to them,” Kuhn said during the May 16 trip.

For players such as Kramer, who played during the Vietnam era, participating in the Honor Flights is a way of bringing healing. Players during the 1960s are well aware of the reception the veterans got coming home. For these athletes, it’s a chance to give the players a homecoming they didn’t get before.

Playing during the Vietnam era and seeing first hand the cold homecomings Vietnam vets received decades ago had a big impact on Hall of Famer and Packer great Jerry Kramer and played a major role in his decision to get involved with the Never Forgotten Honor Flight program.

“I saw this as an attempt to ease some of the pain for some of the Vietnam veterans, I thought maybe this could heal things a little bit,” Kramer said. “I thought if they could see the monuments, memorials, and all the things that have been erected for them … and maybe hear the cheers of a few folks along the way … it might help a little bit.”

A storyteller in his own right, Kramer enjoyed having the chance interview veterans once again for a half-hour documentary, Jerry Kramer Honoring our Freedom DVD, while sharing his own stories of the Ice Bowl and playing under legendary Green Bay Packer coach Vince Lombardi.

Green Bay Packer Hall of Famer Gilbert Brown and Mayfield Sports Marketing Owner and President Mark Mayfield had the opportunity to join area veterans on a Never Forgotten Honor Flight in May 2018. With a father who served in the Navy, Brown understands first hand the sacrifices military members and their families make.

“Every time I’m signing autographs or every time I’m somewhere, I stand up and shake these guys’ hands. Just out of the respect for the things they have done us and paved the way for us,” he said.

Continuing the tradition of Kuhn and Kramer before him, Brown also had the opportunity to sit down and interview veterans on the flight for a half-hour documentary, Gilbert Brown Honoring our Freedom DVD. He even credits his time with the Green and Gold for helping him take on the new challenge of interviewer:

“Being able to interview these guys, it lets them open up because they do feel like we have a rapport,” Brown said. “Football, basketball, guys like us, we’re the made-up guys. We’re like the comic book guys compared to these guys. They are real-life heroes and champions

If you are a nonprofit and would like to work with a celebrity athlete to bring awareness to your cause, contact Mayfield Sports Marketing today with our convenient online contact form. We can help connect you with an athlete that will enhance your fundraising and bring visibility to your efforts.

On behalf of everyone at Mayfield Sports Marketing, thank you to all the veterans for your service and Honor Flight organizations who do such great work.