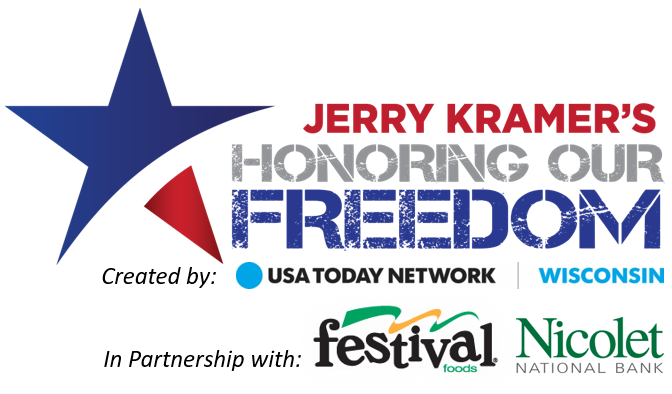 Breaking News: We are truly humbled, honored and priviledged to announce along with USA TODAY, Green Bay Press-Gazette and CAA that our close friend and client, Jerry Kramer, former Green Bay Packer will film a documentary that will be aired later this year.

WAUSAU, WI – USA TODAY NETWORK – Wisconsin announced today that is has partnered with Never Forgotten Honor Flight, a non-profit organization of dedicated volunteers that help provide veterans with closure, gratitude, and respect by flying them to Washington D.C. to visit their war memorials.

“We as a nation are forever indebted to our veterans for the freedoms we enjoy,” said Pamela Henson, Regional President of USA TODAY NETWORK – Wisconsin. “We are honored to accompany our heroes on this incredible and inspiring journey, and look forward to showing them just how grateful we are for their service to our country.”

USA TODAY NETWORK – Wisconsin and celebrity spokesperson Jerry Kramer, who is best remembered for his 11-year National Football League career with the Green Bay Packers as an offensive lineman, will be accompanying the Never Forgotten Honor Flight on Monday, May 22 to Washington D.C. They will join 85 Vietnam Veterans and five Korean War Veterans on this flight, and capturing moments on film that will be shown in USA TODAY NETWORK – Wisconsin’s 2nd Annual Honoring Our Freedom Documentary.

“I feel such a tremendous honor to be able to be a part of this flight,” said Kramer. “I will carry thoughts of my family who have served and currently serve, as I help celebrate the lives and service of these veterans.”

Never Forgotten Honor Flight is based in Wausau, Wisconsin and is the fifth Wisconsin-based affiliate of the national Honor Flight Network of 130 hubs in 43 states. Since 2005, the Honor Flight Network and its affiliates have safely transported more than 160,000 veterans through similar “Honor Flights”. Veterans are selected on a first-come first-served basis with priority given to WWII veterans and any veteran with a terminal illness.

The 2017 Honoring Our Freedom documentary will be shown at a public event in December. Details will be released as they become available.

To capture the essence of state side events during times of war, between Memorial Day and Labor Day, USA TODAY NETWORK – Wisconsin will be collecting letters that were sent home from veterans from the personal collection of their loved ones, as well as family stories told from the perspective of time gone by. Featured letters will highlight current events from that time-period, such as political controversy, community events, or family dynamics, and will be featured in USA TODAY NETWORK – Wisconsin papers statewide weekly. Letters can be submitted and viewed at www.HonoringOurFreedom.com.