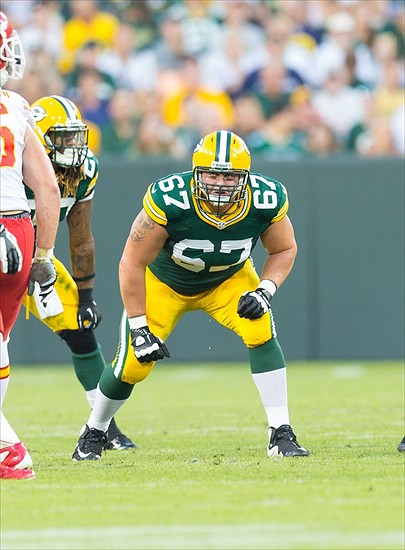 Today’s featured Mayfield Sports athlete is Packers offensive lineman Don Barclay (@Barclay_64 on twitter). Barclay was born on April 18th, 1989 in Newport News, Virginia. He lettered 3 years for Seneca Valley High School in Pennsylvania where he was named second team all-conference and first team all-conference twice. Barclay attended West Virginia where he was a 3 year starter for the Mountaineers and tied a school record by playing in 52 career games. In 2010 as a junior he was a 2nd Team All-Big East selection. As a senior in 2011 he earned 1st Team All-Big East and 4th Team All-American honors. He did not get drafted in the 2012 draft, but signed with the Packers as an undrafted free agent and was one of only 4 rookie free agents to make the opening day roster for the Packers. He was also the only offensive rookie to appear in every game in 2012. In his sophomore campaign he started 14 games for Green Bay.

Some interesting facts about Barclay are that growing up he played linebacker and tight end one year, but the rest he was a lineman. His favorite thing about Green Bay is that it’s a small town and everyone is close to one another unlike in bigger cities. If he wasn’t playing football he says he would be in a financial or sales field and would like to own his own company. His favorite color is blue and if he was an animal he says he’d be a dog because they are active and like to have fun!

Book Don Barclay for your next business event here! http://mayfieldsports.wpengine.com/quick-quote/