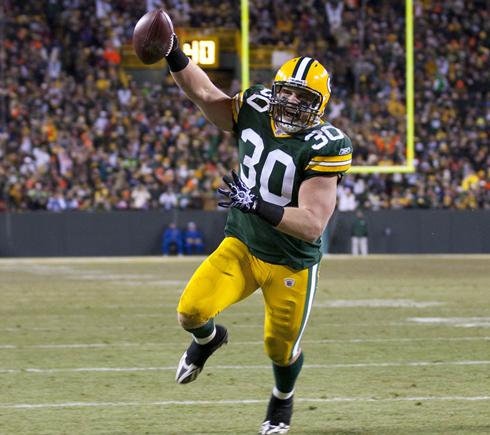 Today’s featured Mayfield Sports athlete is Packers fullback John Kuhn. Kuhn was born on September 9th, 1982 in Dover, Pennsylvania. As an outstanding high school athlete he played football, basketball, baseball, and ran track. In football he played both sides of the ball, playing HB/FB and linebacker. He went on to play football for Shippensburg University. During his time there he was a 3 time All-American and was a finalist for the Harlon Hill Trophy (the Division II equivalent of the Heisman trophy). Kuhn holds 27 school records and six PSAC records, with 4,685 career rushing yards and 53 career touchdowns. Kuhn went undrafted in 2005 but was signed by the Steelers and was a part of the Superbowl champion team in 2006. In 2007 he was signed by the Packers and has been with them ever since. Some highlights from his time so far in Green Bay include winning Superbowl XLV, going to the Pro Bowl in 2011, and Second-Team All-Pro honors in 2011.

John Kuhn is married to his wife Lindsey and they play an active part in Packers charitable events and are dedicated to the success of the House of Hope, a Green Bay shelter for homeless single mothers, ages 18 to 24, and their children. He has a pet dog- a boxer named Buckwheat and his favorite color is blue. His favorite thing about Green Bay is the rich tradition also saying he is humbled to play on the field following all of the great players who have played here and to play with his current teammates. He majored in chemistry, so if he weren’t playing football he would have wanted to be a dentist. Lastly he is currently reading the third Hunger Games book because he enjoyed the first two movies.

Book John Kuhn for your next business event here: http://mayfieldsports.wpengine.com/quick-quote/