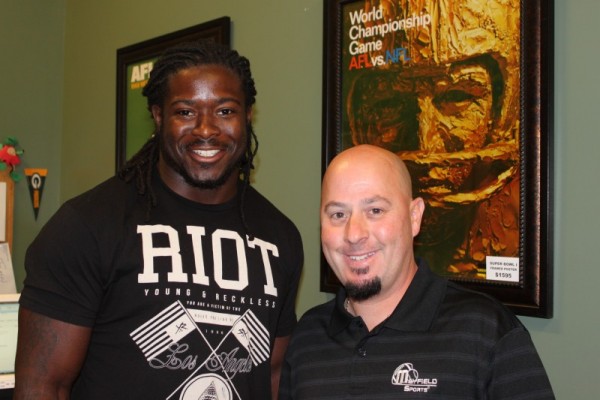 Today’s featured Mayfield Sports athlete is Packers All-Pro Eddie Lacy.  Eddie was born in Gretna, Louisiana on June 2nd, 1990.  Lacy attended Dutchtown high school where his junior and senior years he was named to the class 5A all state team. Lacy then went on to play at the University of Alabama. His first season there he redshirted for the eventual national championship winning team. His second season in 2010 as a redshirt freshman he was Alabama’s 3rd string running back behind two current NFL players Mark Ingram and Trent Richardson. The 2011 season Lacy moved up to the #2 running back where he helped Alabama win the 2012 national championship. In Lacy’s final season at Alabama, he was their feature running back and he handled it well. He was named to the first team all SEC team, was named the SEC Championship Game MVP and was the Offensive MVP for the BCS National Championship Game as Alabama repeated as national champions.  After being selected in the second round of the draft by the Packers, Lacy was determined to continue being successful on the football field. With his hard-nosed and physical running style, he ran for over 1,100 yards and 11 touchdowns, which have earned him Rookie of the Year awards from a number of publications as well as AP second team All-Pro honors and a trip to the Pro Bowl!

Book Eddie Lacy for your next business event here! http://mayfieldsports.wpengine.com/quick-quote/