Connect With a 2021 Pro Bowler Today! 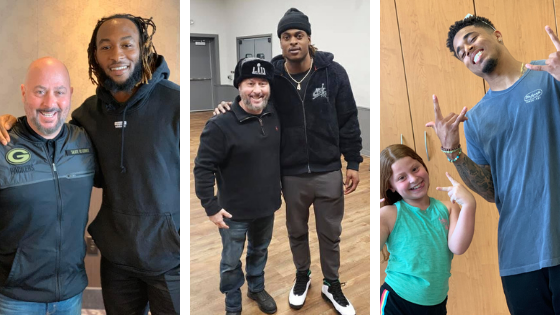 Even though there won’t be a physical Pro Bowl game played this year, the honor for being selected as a 2021 Pro Bowlers does not change. Athletes are chosen for the Pro Bowl by coaches, players, and fans, with each contingent making up one-third of the vote. We here at Mayfield Sports Marketing would like to celebrate the seven of our home state Packers who were selected along with a few other players across the league.

After being snubbed last year, Za’Darius Smith gets the selection he rightfully deserves for the 2021 Pro Bowl. After 15 games this season, Smith is tied for third in the NFL with 12.5 sacks and tied for fifth in tackles for loss as well as 34 solo tackles and 16 assists. Over his two seasons with the Packers, Smith has garnered 26 sacks, the first Packer to have 11+ sacks in back to back seasons since Aaron Kampman accomplished the feat in 2006.

NFL Network’s pre-season list of the top 100 players in the NFL featured Smith at number 48. USA Today’s touchdown wire had him ranked as the number one edge defender, and Pete Prisco of CBS Sports had Smith as number 28 overall of all NFL players.

For an amazing fourth consecutive year, Davante Adams has been selected to the 2021 Pro Bowl. With separation ability second to none with a lightning-fast release and rapid footwork along with an uncanny ability to make contested catches deep down the field, Adams has placed himself among the elite receivers not just of this season but in history. He finished the season with 115 catches and 18 touchdown receptions, only the third ever to exceed 100 catches and 16 touchdown receptions in a single season.

While all three Packer’s single-season receiving records were in range going into the last game, Adams was able to break the receptions record of 112 previously held by Sterling Sharpe in 1993. He tied the receiving touchdowns record, also set by Sterling Sharpe in 1994. He came up just shy of Jordy Nelson’s reception yards record of 1519 yards set in 2014. Adams ended the season with 1374 yards.

The fact that he broke one record, tied another, and got so close to another is made even more incredible by the fact he missed nearly three full games to injury. There are no guarantees, of course, but it would certainly seem very likely that all three records would have fallen if Adams had a full season to work, but it’s an amazing feat nonetheless.

If you have been watching the Packers closely, you know that Jaire Alexander is a star. Becoming widely-known as a shutdown corner, currently ranked number two by Pro Football Focus, Alexander is getting the attention of opposing quarterbacks. Last season, Alexander was targeted 6.9 times per game. This year that number dipped to about 5.5 targets per game. After allowing a quarterback rating of only 85.8 last year, he has improved that number to 71.3 this year.

Currently sitting at number two on Pro Football Focus’s ranking of offensive tackles, David Bakhtiari has been selected to his third pro bowl. Widely regarded as one of the league’s best tackles in the game, Bakhtiari has continued to build upon those accolades. A big reason for the Packers’ success this season has stemmed from the stellar protection of future Hall of Fame quarterback Aaron Rodgers. David Bakhtiari, as the blindside tackle, is a huge reason for that. Unfortunately, after a freak injury at a non-contact practice, the Packers will be forced to make their Super Bowl run without Bakhtiari, putting a damper on their chances.

Versatility. That is Elgton Jenkins to an absolute T. Officially, he’s a left guard, but he possesses the scarce ability to not only play anywhere on the line but excel at all three positions. This year has seen him play guard, tackle, and center while only allowing a single sack overall. Usually, an offensive lineman is played on a single position, occasionally playing their position on the other side of the line, not so with Jenkins, who will move around to cover any position based on injury and those available to fill in. When center Corey Lindsey was injured, Jenkins moved to that spot to more easily fill the guard position. And again, Jenkins excelled.

Currently sitting fourth in rushing yards, twelfth in rushing touchdowns, and first on runs of 40 plus yards, Aaron Jones was selected to his first-ever Pro Bowl after many feeling that he was snubbed last year. With one game remaining, he has accrued eight rushing touchdowns this season. If he can get two more, he’ll become only the second Packer ever, Jim Taylor the other, with consecutive seasons with double-digit touchdowns and over 1,000 rushing yards.

In a Hall of Fame career with many amazing seasons, Aaron Rodgers is putting together one of the best in 2020, comparable only to his MVP season in 2011. A front runner to win the MVP again this year was selected to his ninth Pro Bowl for 2021, tying the Packers record for Pro Bowl selections. Currently, he sits sixth in passing yards, second in completion percentage, first in quarterback rating, first in touchdown to interception rating with an incredible 8.8 TDs per interception thrown, first in touchdown passes, and first in interception percentage.

After leading the fan voting for the top NFC running back, Dalvin Cook will return to the Pro Bowl for the second straight year. Cook is currently second in the NFL in rushing yards and tenth among RBs for yards per carry. He’s also leading the league in yards from scrimmage, rushes for first downs, and tied for the lead for rushing touchdowns.

In his fourth season, Alvin Kamara has again been selected to the Pro Bowl, making a Pro Bowl nod for each season he’s been in the league. On Christmas Day, Kamara rushed for 155 yards and tied the NFL record for most rushing touchdowns in a single game with six, a record established and never touched in 91 years.

Despite a historic rookie season in 2018, Darius Leonard did not make the Pro Bowl that year. He has, however, been selected the past two years. Currently, he is sitting tied for ninth in the league in tackles. Displaying an incredible knack for making game-changing impact plays, look for Leonard to make many more Pro Bowls to come.

Xavian Howard is leading the league in passes defended and interceptions and in contention for Defensive Player of the Year. Being selected to his second Pro Bowl, the other being at the conclusion of the 2018 season, he’s one of the best players on one of the top defenses this year. He needs one more interception to tie the franchise record set in 1967.

Connect With a Pro-Bowler Today

Even without a physical game being played this year, making the Pro Bowl is really more about the honor of being selected as one of the best at your position. Fans get to enjoy watching the players compete for this year’s Pro Bowl via Madden ‘21. Congratulations to all the players who made it this year, especially the ones listed above.