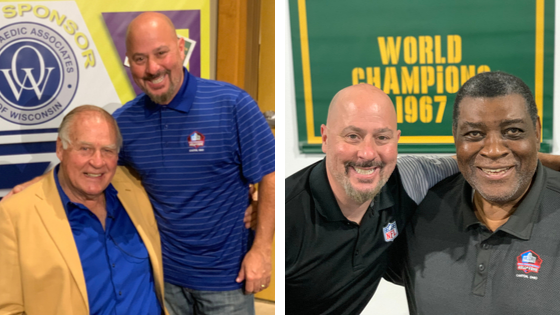 The 2019 NFL season marks the 100th anniversary of the league with the NFL designating an “NFL 100 Game of the Week” each week to symbolize the league’s history and its most memorable moments.

This commemorative series of games began with the Packers vs. the Bears in Week 1, showcasing the oldest rivalry in professional football. Now, the NFL 100 comes to Lambeau Field this week in a rematch of Super Bowl II, the Oakland Raiders vs. the Green Bay Packers.

1967 Was An Amazing Season For the Packers

The 1967 season was an amazing season for the Packers, who were coming off a win in Super Bowl I. Behind legendary Hall of Fame coach Vince Lombardi, and the quarterbacking excellence of Hall of Famer Bart Starr, the Packers had their sights set on defending the inaugural Super Bowl title.

It was an uphill climb just to reach the Super Bowl for a second time. Star players Paul Hornung and Jim Taylor were gone. The players signed to replace them were injured early in the season. Starr missed four games because of injury and had almost twice as many interceptions as touchdowns.

It was the wide receivers that carried the offense that season. Carroll Dale averaged 21.1 yards per catch and Boyd Dowler scored 4 touchdowns with 846 receiving yards. Interesting fact: Boyd Dowler is one of six wide receivers on the NFL 50th Anniversary team, but is the only one of the six yet to be named to the Hall of Fame. Packers fans are hopeful that 2020 will be the year that injustice is corrected.

The Packers had a 9-4-1 record heading into the playoffs, but had given up 78 points in their last three games. They dug deep in the playoffs, first beating the Los Angeles Rams 28-7, then coming from behind to beat the Dallas Cowboys 21-7 in the infamous Ice Bowl game.

In Super Bowl II, the Packers were dominant, beating the Oakland Raiders 33-14. Bart Starr became the first player to be named MVP in back to back Super Bowls. In addition to Vince Lombardi, nine Packer players went on to be enshrined in the Pro Football Hall of Fame.

Mayfield Sports Marketing is proud to work with both current and former Green Bay Packers players. We are especially proud of our connection with Super Bowl I and II via HOF players Dave Robinson and Jerry Kramer, as well as future HOFer Boyd Dowler. All of them are beloved figures in Lambeau lore and always draw a large, enthusiastic crowd at every event they are a part of.

If you’re interested in working with either Dave Robinson, Jerry Kramer, or Boyd Dowler at your next autograph session, business event, or speaking engagement, contact Mayfield Sports Marketing today using our convenient online contact form. You’re sure to have a great turnout when a Packers legend shows up!

On behalf of everyone at Mayfield Sports Marketing, good luck to the Packers this weekend against the Raiders in this special NFL 100 commemorative game.