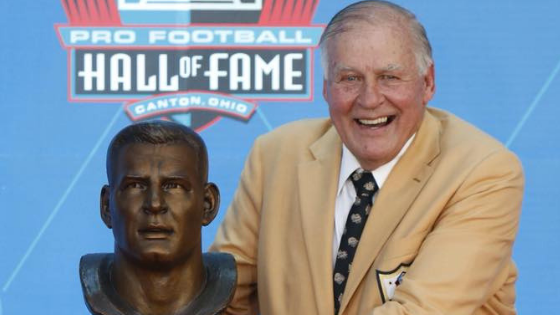 Ashwaubenon, Wis.-Big Top Sports & Entertainment, which owns and operates four teams in the Northwoods League along with Mayfield Sports Marketing, announced today that Green Bay Packers Hall of Famer Jerry Kramer will make a statewide tour to their four ballparks from June 25th through June 28th this summer.

Kramer will appear at the Wisconsin Rapids Rafters game on Tuesday, June 25th followed by the Madison Mallards game on Wednesday, June 26th. From there he will make a return to Titletown where he will appear at the Green Bay Booyah game on Thursday, June 27th before rounding out his statewide tour at the Kenosha Kingfish game on Friday, June 28th.
“We’re extremely honored to welcome one of the Packers all-time legends back to Titletown,” said Vice President John Fanta. “With Capital Credit Union Park nestled in the shadows of Lambeau Field, I can’t think of a more fitting addition than to have Mr. Kramer join us at the new ballpark for a Booyah game this summer.”

Jerry Kramer’s appearance at each stadium will be twofold. For the first 60 minutes after gates open, 6:00-7:00, Kramer will sign autographs on photos provided by each team for 100 VIP ticket holders. No personal items will be signed during this time. A limited number of VIP ticket packages are on sale now for $45 and include a reserved box seat to the June 27th Booyah game, photo of Kramer, and guaranteed autograph from the Packers Hall of Famer during the first 60-minute time slot. The VIP ticket package can be purchased online at booyahbaseball.com or by clicking on the buy tickets link on the Booyah Facebook event page starting April 8th.
Kramer will throw out the first pitch prior to the Booyah Game. At the conclusion of the first pitch, he will return to the autograph site in each stadium for a public session hosted by Mayfield Sports Marketing. At this time fans may have personal Packers items autographed at the rate of $50 for photos (11×14 or smaller), mini helmets and $60 for jerseys, full-size helmets, artwork, and footballs. All autographs include the HOF inscription. Additional inscriptions such as Super Bowl Champs, etc. will be $15 each. Mayfield Sports will also have merchandise available for purchase at each site such as photos, footballs, jerseys, mini/full-size helmets, and HOF items.

Kramer, who played football at the University of Idaho, was drafted by the Packers in the fourth round (39th overall) of the 1958 NFL Draft. He started for the Packers from 1958 to 1968 playing most of his 11-season career under the direction of Hall of Fame Coach Vince Lombardi. Upon entering into the NFL, he was hailed as one of the best blockers in the game and earned his first All-NFL recognition in 1960. Kramer played a total of 130 career games as the Packers right guard and served as the team’s placekicker for several seasons. His leadership and talents helped the franchise capture five NFL championships and victories in Super Bowls I and II. Kramer earned All-NFL honors a total of five times (1960, 1962-63, 1966-67) and was voted to three Pro Bowls. He was also named to the NFL’s All-Decade Team of the 1960s, the NFL’s 50th Anniversary Team in 1969 and the Super Bowl Silver Anniversary Team. He was elected into the Pro Football Hall of Fame on August 4th, 2018 at age 82.

The Green Bay Booyah open up the season on Tuesday, May 28th at 7:05 in Traverse City, Michigan. Capital Credit Union Park will host the first Booyah home game against the Wisconsin Rapids Rafters on Saturday, June 1st at 7:05. Single game tickets go on sale Friday, April 26th at 9 a.m.

The Green Bay Booyah are a member of the finest developmental league for elite college baseball players, the Northwoods League. The 25-year old summer collegiate league is the largest organized baseball league in the world with 22 teams, drawing significantly more fans, in a friendly ballpark experience, than any league of its kind. A valuable training ground for coaches, umpires and front office staff, over 200 former Northwoods League players have advanced to Major League Baseball, including three-time Cy Young Award winner Max Scherzer (WAS), two-time World Series Champions Ben Zobrist (CHC) and Brandon Crawford (SFG) and MLB All-Stars Chris Sale (BOS), Jordan Zimmermann (DET) and Curtis Granderson (MIA). All league games are viewable live via the Northwoods League portal. For more information, visit www.booyahbaseball.com or download the new Northwoods League Mobile App on the Apple App Store or on Google Play and set the Booyah as your favorite team.