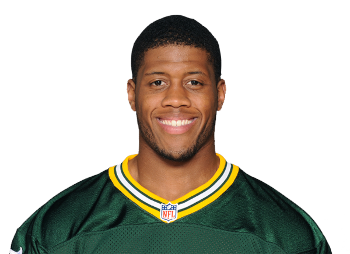 Do you have an event, autograph session and/or endorsement opportunity for Packers Jarrett Boykin. Contact us today.

COLLEGE: A four-year letterman for the Hokies, he finished his career as the school’s all-time leader in receptions (184) and receiving yards (2,884)…Senior season (2011): Started all 13 games and caught a single-season school-record 61 passes for 761 yards (12.5 avg.) and five TDs…Became Tech’s all-time leader in receptions with a team-high four grabs for 48 yards (12.0 avg.) at East Carolina (Sept. 10)…Caught a team-best seven passes for 120 yards (17.1 avg.), including a 60-yard TD in the fourth quarter, vs. Miami (Oct. 8)..Broke the school’s career receiving yardage mark with a 12-yard grab late in the first half against the Hurricanes…Broke Ernest Wilford’s single-season reception record with three grabs for 58 yards (19.3 avg.) in the ACC title game vs. Clemson (Dec. 3)

PERSONAL: Given name Jarrett Boykin Jr. …Born in Chattanooga, Tenn. …His father passed away when he was a baby…Cousin, DeAngelo Lloyd, played DE at the University of Tennessee and went to training camp with the Packers as a non-drafted free agent in 2001…High school: Was a first-team all-state selection by The Associated Press as a senior at Butler High in Charlotte, N.C. …Caught 60 passes for 1,252 yards (20.9 avg.) and 17 TDs as a senior…Added 276 rushing yards and eight TDs on the ground…Posted 476 receiving yards as a junior…Also returned punts and kickoffs…Community involvement: Participated in the “Relay For Life” at Virginia Tech to benefit the American Cancer Society…Hobbies/interests: Enjoys drawing, fishing and playing basketball…Lists favorite athletes as Michael Jordan and Larry Fitzgerald and favorite recording artists as Wiz Khalifa, Wale and J. Cole…Residence: Charlotte, N.C.