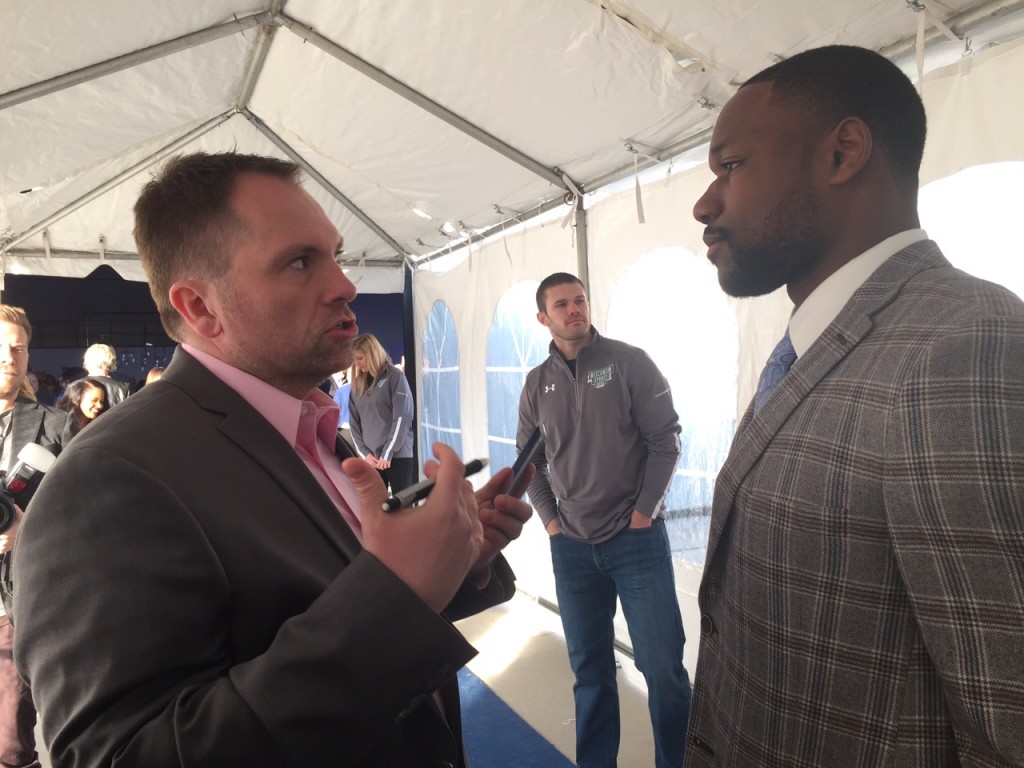 We really enjoyed attending the Wisconsin Sports Awards but take time out to remember some people have to work while attending. A good read from our friend Jason Wilde about our friend and one of our many guests, Ty Montgomery.

GREEN BAY, Wis. – Maybe it wasn’t quite as glamorous as the red carpet at the Academy Awards, but something very important happened on the Wisconsin Sports Awards’ signature blue carpet before their fifth annual gala earlier this week – something especially noteworthy for the 2016 Green Bay Packers’ offense.

Ty Montgomery walked down the carpet. No limp, no crutches, no scooter like the one he used following ankle surgery last December. And while the versatile, second-year wide receiver wouldn’t have been allowed to sprint – if such behavior weren’t frowned upon – and will be limited when the team officially begins its offseason program on Monday, it’s encouraging that he’s finally feeling healthy.

“Stepping onto the field healthy,” Montgomery replied when about his goal for this season. “I haven’t done it since Week 6. That’s the biggest thing on my mind, just making sure I’m able to get back out there healthy.”

After catching 15 passes for 136 yards and two touchdowns and averaging 31.1 yards per return as the Packers’ primary kickoff returner in the first six games, Montgomery sustained what was initially thought to be a mere ankle sprain in the team’s Oct. 18 victory over San Diego. The injury came just as Montgomery’s role in the offense was expanding, as coach Mike McCarthy looked to take advantage of his versatility by lining him up inside, outside and in the backfield.

But after suffering a pair of setbacks as he tried to return to the lineup, Montgomery landed on injured reserve in mid-December and underwent surgery shortly thereafter, having missed the final 10 games and both of the Packers’ playoff contests.

“I didn’t know what to expect from my rookie season, and I definitely didn’t expect that at all. But I’m grateful for where I am,” Montgomery said. “God has a plan at the end of the day, and I’m right where I’m supposed to be right now.”

Montgomery said the surgery repaired a torn ligament and cleaned out and reattached some loose cartilage on the talus, the large bone in the ankle that connects the tibia to the foot.

Although McCarthy said last month at the NFL meetings that he doesn’t expect Montgomery to be fully cleared until training camp, Montgomery impressed coaches last season with his ability to pick up the Packers’ offense quickly, even after missing most of the team’s organized team activity practices while finishing up his coursework at Stanford. That should help him make the most of the offseason program, even if he can’t do much physically.

Montgomery said while he isn’t running, he is “getting to that point,” doing unloaded running in the rehab pool and “incorporating more lower-body exercises” than he had been doing.

“Everything is moving smoothly,” Montgomery said. “My timeline is their timeline. We’re all working together and just making sure the best things happen for me [to get healthy].”

For more information on Ty Montgomery for upcoming player appearances, motivational speaking, product endorsement and other events, contact us at 262.366.8188.