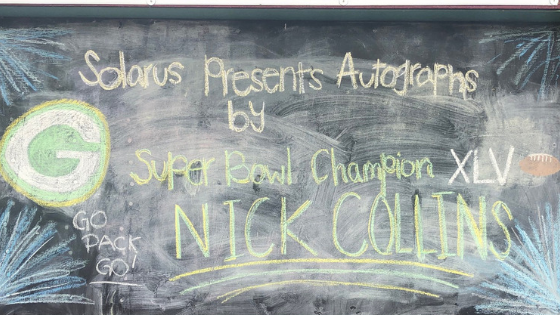 While fans knew of his football greatness, many were surprised when he shared baseball was actually his first passion, even being drafted by the Atlanta Braves out of high school. Needing to focus on one sport while attending Bethune-Cookman, Collins thankfully choose football, being drafted by the Packers in 2005 in the second round of the draft.

During his seven seasons with Green Bay Collins played in three Pro Bowls, was a three-time Second-Team All-Pro, NFC Interception co-leader in 2008, NFL interception return yards leader in 2008, and Super Bowl XLV champion. In 2016, Collins efforts and accomplishments with the Packers were further recognized as he was inducted into the Green Bay Packers Hall of Fame.

Currently residing with his family in Florida, Collins is available for motivational speaking, autograph sessions, player appearances, and endorsement opportunities.

Just like the Packers, Solarus is owned by local stockholders, with employees living in the communities they serve. They understand the value of community routinely give back to local initiatives, organizations, and area schools as part of their commitment to making Central Wisconsin a great place to do business, work and live.

Bringing Packer greats to Historic Witter Field to meet their fans is nothing new for the Rafters. This is the second time they’ve partnered with Mayfield Sports, kicking off the Jerry Kramer Baseball Stadium Tour the end of June.

Their first game back after the All-Star break where Rafters Richie Schiekofer, Neil Abbatiello, Matt Osterberg, and Jake Dunham played significant roles in the Great Lakes 5-2 victory, the Wisconsin Rapids Rafters shut out the Kenosha Kingfish 1-0 in the evening’s game.