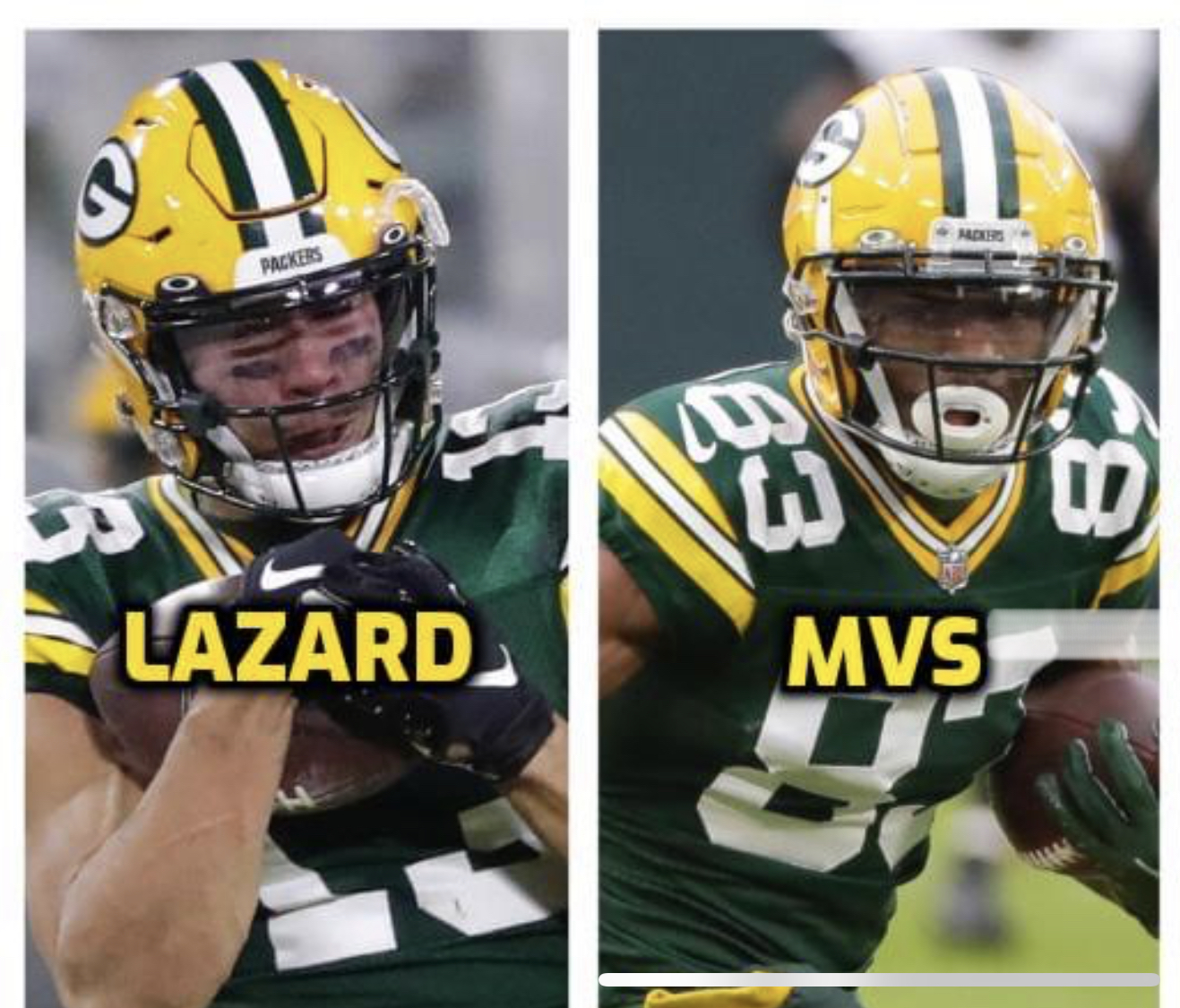 The Green Bay Packers have a plethora of talent on their team this year. Many players who would be locks for other team’s rosters may end up getting cut from the Packers’ final roster. Of the players who are locks, Packers Wide Receivers Allen Lazard and Marquez Valdes-Scantling, two players whom we at Mayfield Sports have worked with in the past, are in an interesting competition. Both players are entering contract seasons. Additionally, both are candidates for the Packers’ second wide receiver position.

Of course, Davante Adams is the Packers’ number one wide receiver. After him, though, there is a battle for which player will take the second guaranteed starting spot. Both Lazard and Valdes-Scantling (MVS) had opportunities to be the second starter last season. Both had some fantastic games, but also had their separate struggles. Coming into camp, there was no clear-cut number two option at wide receiver. Undoubtedly, however, it will be one of these two players.

The decision of which of the two players will start at the second wide receiver position is very difficult. Each brings unique strengths to the offense. The question is which one is better or has the most potential to be a number two option. What complicates it further is that their stats from last season do not lend much help.

From the stats above, it would appear that MVS had a much better season than Allen Lazard. However, it should be taken into consideration that Lazard missed six games due to a core muscle injury that required surgery. Additionally, he came back midseason and was still hampered by the injury. Taking that into consideration, one would assume that had the two played the same amount of games, it would have been Lazard with better statistics. After all, Lazard had a higher catch percentage and lower drop rate than MVS. That being said, “what ifs” do not help answer the question.

The Green Bay Packers played two playoff games last season. As the number one seed, they were able to sit out of the Wild Card round before facing the Los Angeles Rams in the Divisional Round. Here is how MVS and Lazard compared in that game:

After defeating the Rams, the Packers hosted the Tampa Bay Buccaneers in the NFC Championship. Again, here is how the two receivers faired in that contest:

Based on these games, the two receivers combined for roughly the same stats. In other words, they were equally productive. Clearly, the answer to the question must come from training camp and preseason games.

As head coach Matt LaFleur stated, no player that he deems valuable to the Packers’ preparation from Week One of the regular season will play a snap of any preseason games. That means that neither MVS nor Allen Lazard will be on the field in any of the team’s remaining preseason games. The answer to our question of who will be the number two receiver, then, will be determined in training camp.

The Case for Allen Lazard

Lazard showcased his potential last season in the game in which he actually injured his core. Against the Saints in Week Three, Lazard had six receptions for 146 yards and a touchdown. For a brief moment, it appeared as if he had locked up the second receiver position for good.

The Case for MVS

Few wide receivers in the NFL last season were criticized as much as MVS was. That being said, few wide receivers are as fast as MVS is. While the drops were a problem last season, reports from training camp state that he is using his body less to catch passes, a technique that led to drops last season. If MVS can cut those dropped passes in half, the Packers will have a second 1,000 receiver on the team.

The reason why MVS put up the numbers he did was because of his speed. He is a lethal downfield weapon who can blow by most defenders. His 20.9 yards per reception last season led not only the Packers, but the entire NFL.

There is no clear answer to this question, and with limited eyes on the practice field it will be difficult to guess what Matt LaFleur is going to do. One thing is for sure, though: both players are highly qualified and will be key contributors to the Packers’ 2021 season, and hopefully their Super Bowl run.

Call Mayfield Sports Marketing at 262-366-8188 to schedule or Packers Marquez Valdes-Scantling and / or Packers Allen Lazard for your corporate appearance or product endorsement.  Our booking agents will work on your behalf to get you the best price for your desired sports speaker.

Mayfield Sports Marketing has earned a reputation of being the one to call for booking top Wisconsin and National Athletes to speak at events and trade shows. To learn more about MVS or Allen Lazard appearances cost and booking fee, please call us today at 262.366.8188. www.MayfieldSports.com.