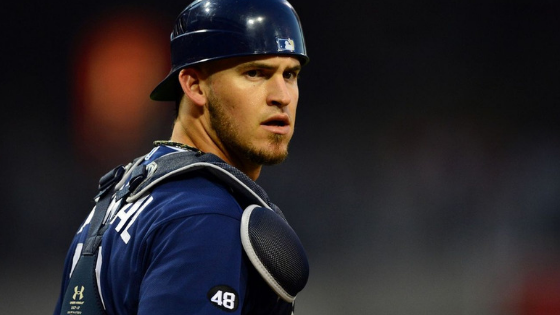 It is yet another season of excellent Brewers baseball and a large portion of this success can be attributed to, now All-Star, Brewer’s catcher Yasmani Grandal. A brick wall behind home plate, Grandal is looking forward to representing the Milwaukee Brewers as part of the National League roster for the 2019 MLB All-Star Game.

“Obviously, I wanted to come here and battle it out, go to war with this team,” Grandal said. “The fact that I got picked to go to the All-Star Game with these guys and represent this organization, it’s just sweeter.”

Grandal played baseball for the University of Miami. He was named the 2006 All-American Classic Player and was invited to the National Showcase that same year. Grandal was named #38 overall in his class on the Top 100 National Ranking List. He also played for the 2009 USA National Baseball Team. He started 83 games behind home plate, earning a .978 career fielding percentage. In 97 total career games, Grandal recorded 23 home runs and 73 RBIs. He was the top offensive player at Miami, hitting a home run once every 13.9 at-bats. Grandal was drafted 27th overall in the 2007 MLB Draft by the Cincinnati Reds.

Grandal has played for three clubs in the MLB as both catcher and first baseman; the San Diego Padres, Los Angeles Dodgers, and Milwaukee Brewers producing impressive stats of 338 runs, 616 hits, 131 home runs, and 386 RBIs. In 2015, Randal played 107 games while posting a .997 fielding percentage, with his lowest fielding percentage a .990 in 2013. For his total career, Grandal has picked off 124 runners, played in 705 games while starting 643 of them, and has posted only a minuscule 36 errors.

The 2019 season for Grandal has placed him into the 2019 MLB All-Star Game, playing 81 games, recording 43 runs, 69 hits, 18 home runs, and 47 RBIs. His fielding percentage is .994 as a catcher and 1.000 as the first baseman with a .384 on-base percentage. The month of June saw Grandal get moved up to be first in the Brewers lineup, homering in one of his first games as the leadoff hitter.

Once the All-Star voting began, Grandal was on the brink of making the National League Starters, just barely missed out and will join fellow Brewer, Mike Mustakas, in the dugout. After successfully beating out Wilson Contreras of the Cubs and Brian McCann of the Braves, Grandal will also be joining three of his fellow Brewers teammates for the Mid-Summer Classic in Cleveland.

Grandal is available for appearances including autographs, guest speaking, product endorsements, and more. As the All-Star Game comes closer, appearance slots for Grandal will definitely start to fill quickly so contact Mark with Mayfield Sports at 262-366-8188 to book the Milwaukee Brewer’s 2019 All-Star catcher today.