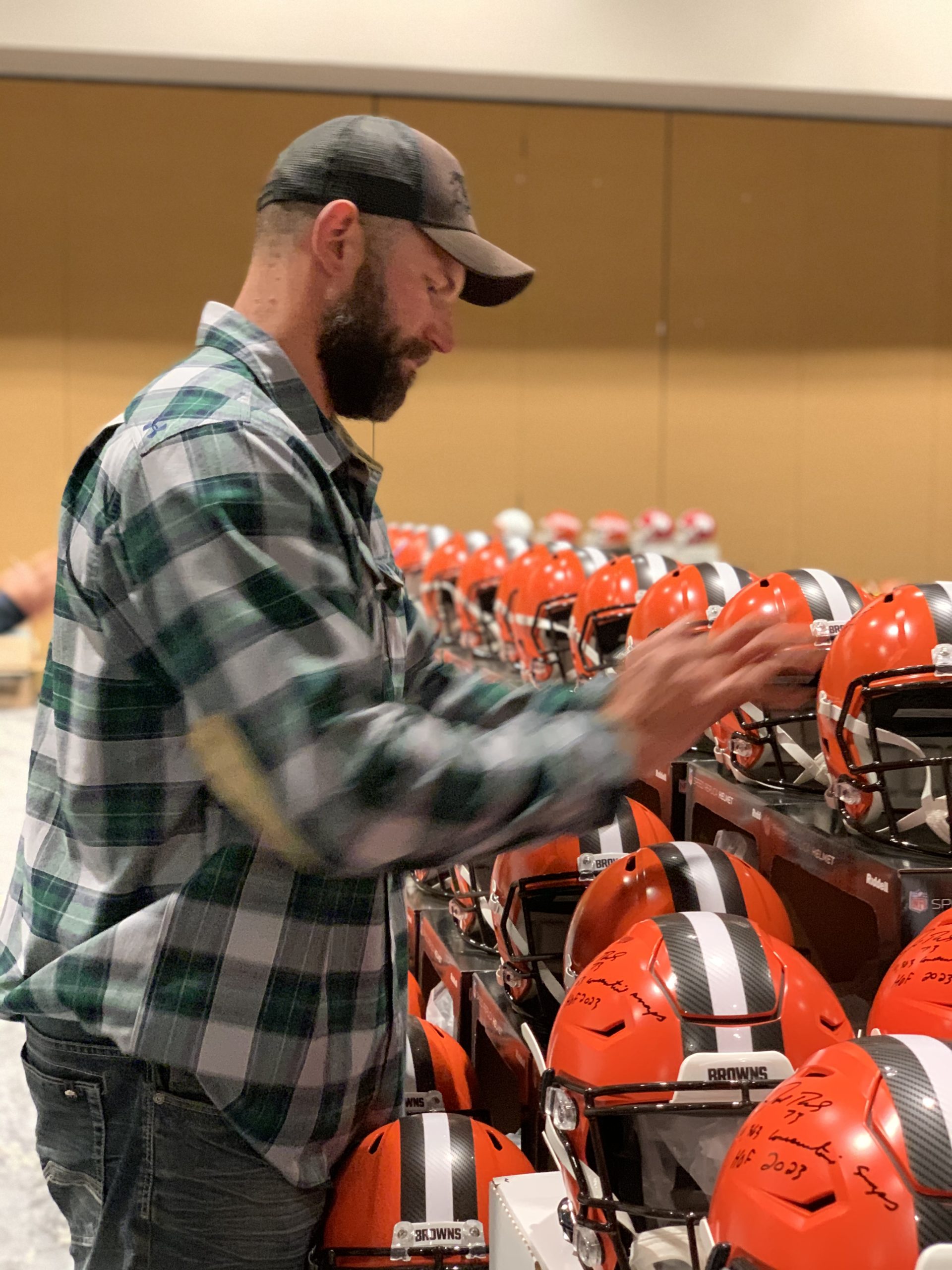 Joe Thomas played his entire 11-season professional career for the Cleveland Browns. He played college football for the University of Wisconsin, earned unanimous All-American honors, and was recognized as the top college interior lineman.

The Browns chose Thomas with the third overall pick in the 2007 NFL Draft. He was invited to the Pro Bowl in each of his first 10 seasons and did not miss a single play in his career until the 2017 season (his final season in the NFL); his 10,363 consecutive snaps played is the longest streak since the NFL began recording snap counts in 1999. He is regarded as one of the best offensive linemen of all time.

Thomas signed a six-year contract worth $43 million, $23 million guaranteed, including a voidable year, with the Browns. Thomas won the starting left tackle job, with previous Browns left tackle Kevin Shaffer moving to right tackle. He made his NFL debut versus the Pittsburgh Steelers in Week 1 and played every offensive snap for the Browns in 2007.

Thomas quickly became one of the top-performing members of the 2007 draft class and was named the NFL’s Rookie of the Month for November. Thomas was selected to the 2008 Pro Bowl, replacing Jason Peters of the Buffalo Bills. He was named to the NFL All-Rookie Team.

Thomas came in second in the voting for NFL Rookie of the Year. He was the only player to receive votes besides the eventual winner, Adrian Peterson.

On August 22, 2011, Thomas and the Browns agreed to a record-setting seven-year, $84 million extension with $44 million guaranteed.

On December 27, 2011, Thomas was named to his fifth straight Pro Bowl since the Browns drafted him. Since 1970, Thomas and Richmond Webb of the Miami Dolphins are the only NFL offensive linemen to make the Pro Bowl in each of their first five seasons.

Thomas and Pro Football Hall of Fame running back Jim Brown are the only Browns players ever to be selected to the Pro Bowl for the first five seasons of their careers. Hall of Fame running back Leroy Kelly was the last Browns player to earn five or more consecutive invitations to the Pro Bowl. For the third consecutive season, he was named as a First-Team All-Pro. He was ranked 82nd by his peers on the NFL Top 100 Players of 2012.

On March 14, 2018, Thomas announced his retirement from the NFL. Despite retiring with a career record of 48 wins, 128 losses, and no playoff appearances, Thomas provided a bright spot on the often struggling Cleveland Browns, playing 10,363 consecutive snaps (the longest streak since snap counts were first recorded in 1999), being voted to ten Pro Bowls, seven first-team All-Pro selections, and two-second team All-Pro selections during his 11 seasons; he has widely been regarded as one of the NFL’s greatest offensive lineman of all time, particularly noted as one of the best left tackles in NFL history.

In April 2020 Thomas was named to the 2010s NFL All-Decade team. Noted for his durability, quickness, and athleticism at left tackle, many attribute his legendary pass blocking skills to his unorthodox style, utilizing a “shot put” method to kick off the line; Of 6,680 pass-blocking attempts, Thomas allowed only 30 sacks during his career. He was also known for rarely committing holding penalties.

Joe Thomas is the only offensive lineman in NFL history to be voted to ten consecutive Pro Bowls. He was chosen on NFL.com as the 7th greatest offensive tackle of all time, as well as the third greatest Cleveland Brown of all time. He will be eligible for the Hall of Fame in 2023.

Mayfield Sports Marketing Agency is a leading football speaker agency. They will book an athlete or hire your Green Bay / NFL Football Star for Your Next Event. Learn more about booking an athlete appearance such as Joe Thomas, Davante Adams, Melvin Gordon, Kenny Clark, and more. We pride ourselves on providing loyalty to our clients and always representing their best interests.