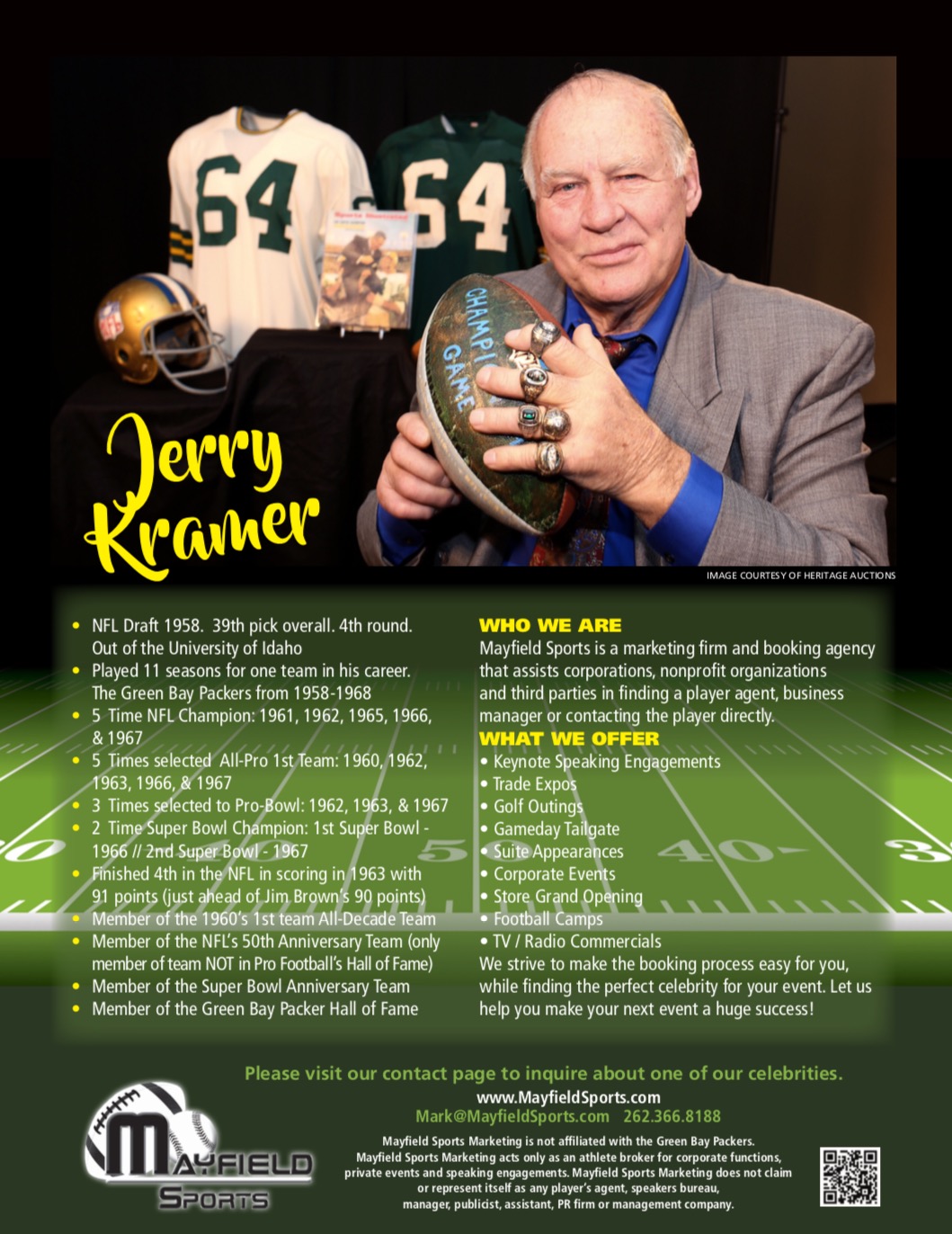 Brazile was a preeminent linebacker in the NFL during his career that spanned from 1975 to 1984 with the Houston Oilers. Noted for his speed, size and strength, he was drafted by the Oilers in the first round, sixth player overall, of the 1975 NFL Draft.  Brazile was named first-team All-Pro four times (1976, 1978, 1979, and 1980) and was elected to seven Pro Bowls. He was also picked to the NFL’s All-Decade Team of the 1970s.

Kramer, drafted in the fourth round, 39th player overall, of the 1958 NFL Draft, starred for the Green Bay Packers for 11 seasons from 1958 to 1968. His leadership and talents helped the franchise capture five NFL championships and victories in Super Bowls I and II. He earned All-Pro acclaim five times and was voted to three Pro Bowls. Kramer was also named to the NFL’s All-Decade Team of the 1960s, and to the NFL’s 50th Anniversary Team in 1969.

“I don’t know what to say,” commented Brazile who was overcome with emotion after receiving a call from Hall of Fame President David Baker moments after the conclusion of today’s meeting. “I’m speechless.”

The Seniors Committee is comprised of nine members of the Hall of Fame’s Selection Committee who consider players whose careers ended at least 25 years ago. Through mail vote, the 2018 senior nominees were reduced to a final list of candidates. Then, on a rotating basis, five of the nine members meet at the Pro Football Hall of Fame to discuss each of the Seniors candidates and select the finalists.

To be elected, Brazile and Kramer must receive the same 80 percent voting support by the entire 48-member Selection Committee on “Selection Saturday.” The Hall’s Selection Committee, at its annual meeting to be held on Saturday, February 3, 2018 in Minneapolis, Minn., will consider 18 finalists, including two Seniors (Brazile and Kramer), one Contributor (to be named Friday, Aug. 25), and 15 Modern-Era Finalists (to be determined from a preliminary list announced in early-September; trimmed to 25 semifinalists in November and to 15 finalists in January). Current bylaws call for a class no smaller than four or larger than eight. The Senior Finalists will be voted on for election independent of the other finalists.

The Class of 2018 will be formally enshrined during the Pro Football Hall of Fame Enshrinement Week Powered by Johnson Controls in Canton next August.