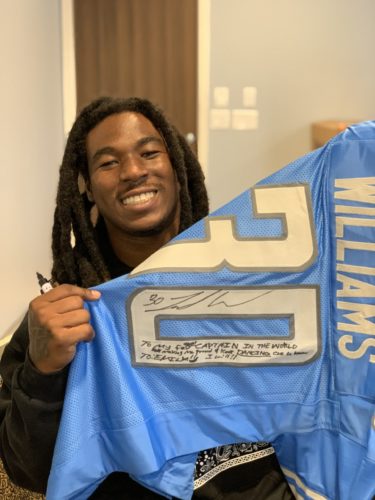 There are times in every franchise’s history when popular players are let go for one reason or another. Never was this more true for the Green Bay Packers than when Jamaal Williams was not brought back after the 2020 season. Williams was long considered to be the Packers’ RB1B, meaning that he was so good that he could have been a starter on most other teams. Along with fellow 2017 NFL Draft Pick Aaron Jones, Williams provided Packers’ fans with some incredible memories both on and off the field.

Jamaal Williams started his career with Green Bay Packers when they selected him in the fourth round (134th pick) of the 2017 NFL Draft. The year previous, Eddie Lacy and Ty Montgomery were the Packers’ running backs. After disappointing years from both, the Packers focused on improving their backfield through the draft. In addition to Williams, Aaron Jones was also selected in the fifth round (182nd pick).

Even though it was Aaron Jones who became the primary back in the Packers’ offense, Jamaal Williams was the one who received the most starts for Green Bay in 2017. Williams played in all 16 games, starting seven of them, and accumulated 556 rushing yards and four touchdowns on the ground. In addition, he caught 25 passes for 262 yards and two more scores. These numbers remain the best of Williams’ career up to current day.

This, however, is not to say that Williams became less effective. In fact, nothing could be further from the truth. Over the next three seasons, Aaron Jones took on more carries in the offense while Williams fulfilled an equally important role: protecting Aaron Rodgers. During his time in Green Bay, Williams established himself as the best blocking running back in the entire NFL. There were countless plays over the past few years that might have ended in disaster had Williams not cleaned up blitzing defensive players.

In 2018, Williams again played all 16 games and started eight of them. He had 464 rushing yards and three rushing touchdowns. In addition, he had 210 receiving yards. As far as total yards from scrimmage go, it was the least productive season of his career.

Enter Matt LaFleur and a new offense in 2019 and Williams, once again, began to thrive. In 14 games (two starts), Williams 460 rushing yards and a score. What was so amazing about this was that he reached that total with just 107 carries, which was the fewest in his career. Williams saw his receptions go way up as he became a bigger weapon in the passing game. In 2019, he had a career-high 39 receptions for 253 yards and five touchdowns.

2020, Williams’ last in Green Bay, was even more productive than his 2019 season. While his receiving yards went down from 253 to 236, his rushing yards went up from 460 to 505. What might be most admirable, though, is the role Williams took on as mentor.

Jamaal Williams as a Mentor to AJ Dillon

Despite having both Jamaal Williams and Aaron Jones on the roster, the Green Bay Packers selected AJ Dillon with their second round draft pick in the 2020 NFL Draft. Needless to say, it was a selection that indicated someone’s days in Green Bay were numbered, whether it was Williams or Jones.

It is never easy to accept that one is replaceable, but both Williams and Jones embraced the young rookie and helped him develop throughout the season. Nowhere was this more evident than the late December game in which Williams was injured. Filling in for his mentor, Dillon rushed for 120 yards and two scores. Fans may be sure that there was no one more happy for the rookie than Jamaal Williams.

After the Green Bay Packers’ disappointing loss in the NFC Championship Game, Williams signed with the Detroit Lions. All across social media, Packers’ fans bid fond best wishes to Williams, who was known for his dancing ritual before, during, and after games. It was not uncommon to see fans posting something along these lines: “I hope the Packers beat the Lions 35-28, and that all four touchdowns for the Lions come from Jamaal Williams.”

Williams still dazzles fans with his incredible dance routines and endears himself to the media with hilarious press conferences. One time, in preseason, two reporters tried to ask a question at the same time. Williams proceeded to make the two play rock-paper-scissors to determine who got to go first.

While Jamaal Williams may not currently sport Green and Gold, fans can be assured that he is, and will always, Carry the G. Once a Packer, Always a Packer, as Lil’ Wayne so eloquently put it in his hit Green and Yellow. Green Bay is proud to have played a part in the career of Jamaal Williams, and we at Mayfield Sports Marketing are proud to continue our partnership with him as he continues his career in Detroit.

Mayfield Sports Marketing has earned a reputation of being the one to call for booking top athletes to speak at events and trade shows. To learn more about Jamaal Williams appearance cost and booking fee, please call us today. www.MayfieldSports.com.