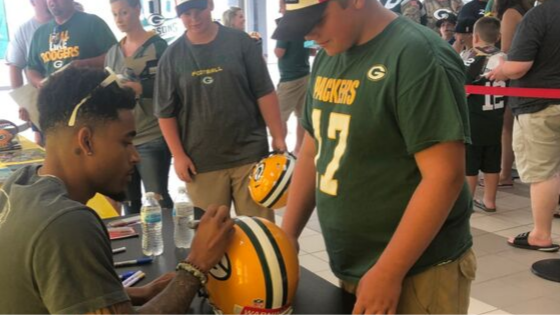 Even though 2019 will only be his second year wearing the iconic Packers green and gold, Jaire Alexander has made a name for himself as one of the up and coming cornerbacks in the league. The Packers coaching staff is ready for a breakout year from this young defensive standout.

“He loves football. Passionately. He’s one of our more vocal guys in the meetings and out on the practice field and on game day. And a lot of that has to do with his confidence. I just think the success that he’s had is only making him more and more confident. But he came in here very confident, and corners have to have that. They can’t have one play affect them.”

Only The Second Green Bay All-Rookie CB Since 1974

It was a historic season for Jaire Alexander. Since 1974, only two Packer cornerbacks have been named to the All-Rookie team. The first was current LA Charger Casey Hayward in 2012. The second was Jaire Alexander in 2018.

You wouldn’t think a 5-foot 10-inch cornerback could have a major impact. But, with blazing speed and an aggressive style of play, the Packers coaching staff were impressed enough to put Alexander up against the best receivers in the game today.

With only two penalties committed on the season, Alexander finished second on the team in tackles per snap and finished first among the defensive backs in passes defended per snap.

Alexander says his goal is to make the Pro Bowl this season. Provided he stays healthy, this is a realistic goal for the 2019 season.

We work with a wide variety of current and former star athletes to increase traffic to your business and improve your brand identity. Use our online contact form to get a quote for your event. Join the Mayfield Sports Marketing team and see how a star like Jaire Alexander can help your business!