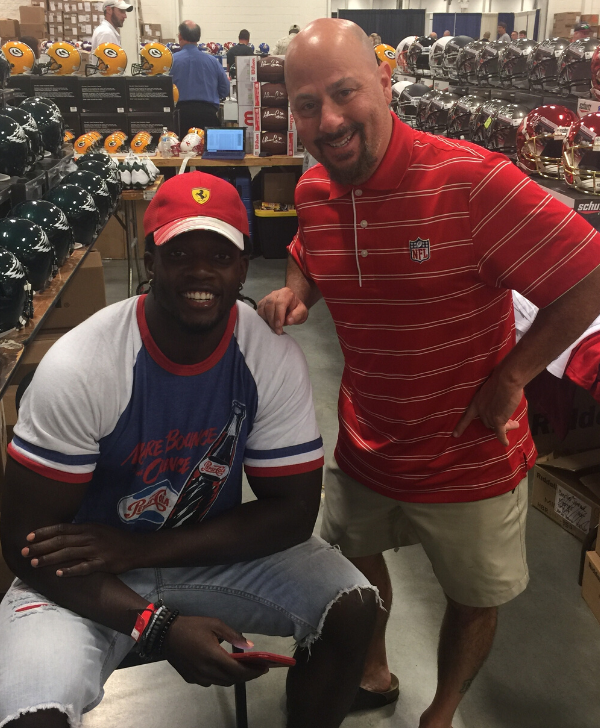 The Wisconsin Badgers football team is known for producing solid NFL players. JJ Watt and TJ Watt have carved out careers that have made them known as some of the best defensive players in the NFL. However, the bread and butter of Wisconsin football has always been its offensive line and running backs. Over the past decade, there have been several running backs from Wisconsin who have had productive careers in the NFL. However, only two of them, thus far, have produced a Pro Bowl caliber season: Montee Ball and Melvin Gordon. Here at Mayfield Sports Marketing, we are proud to partner with Melvin Gordon, one of the most successful Wisconsin running backs in the NFL.

The talent that the Wisconsin Badgers football team had at running back in the early 2010’s was absolutely incredible. When Melvin Gordon was a freshman in 2011, he was the third running back behind Montee Ball and James White. All three of these running backs ended up in the top ten career leaders in rushing yards and rushing touchdowns at Wisconsin.

Melvin Gordon, as might have been expected, did not play much in his first season at Wisconsin. In 2011, he appeared in just four games and received just 20 rushing attempts. He made the most of them, though, rushing for 98 yards and a touchdown.

In 2012, Gordon saw his role increase as he played in all 14 of Wisconsin’s games. He had an astounding 10.0 yards per rush, accumulating 621 yards on 62 rushing attempts. He scored three touchdowns on the ground and added another one as a receiver.

The next season, technically his sophomore season, Gordon became Wisconsin’s premier back. He rushed the ball 206 times for 1,609 yards and 12 touchdowns. However, for Gordon and Wisconsin, the best was yet to come.

In 2014, as a junior, Melvin Gordon had the best season for a running back in Wisconsin football history. In one game against Nebraska, Gordon rushed for 406 yards on the ground, breaking Ron Dayne’s school record of 331 rushing yards in one game. Additionally, Gordon rushed for 2,587 yards for the season. Only Barry Sanders, in 1988, rushed for more in a collegiate season (2,628 yards). Ron Dayne and Jonathan Taylor are the only other two running backs in Wisconsin history to eclipse 2,000 rushing yards in a season. Unsurprisingly, Melvin Gordon declared for the NFL Draft after the season ended.

Melvin Gordon in the NFL

The San Diego Chargers (now the Los Angeles Chargers) made Melvin Gordon the 15th overall pick in the 2015 NFL Draft. Gordon became an important part of the Chargers’ offense. As the starting running back in 12 games, Gordon rushed for 641 and a 3.5 yards per carry average. However, he did not score his first professional touchdown until the following season.

The touchdowns came in bunches that next season as Gordon’s play improved. Playing in 13 games (11 starts), Gordon rushed for 997 yards and 10 touchdowns while averaging 3.9 yards per carry. For his efforts, he was named to his first Pro Bowl despite the Chargers finishing just 5-11.

The next season, 2017, Gordon was even better. He played in and started all 16 games and had his first 1,000 yard season. Gordon carried the ball 284 times for 1,105 yards and eight touchdowns on the ground. He added 476 receiving yards giving him 1,581 all-purpose yards, the most in his career.

In 2018, Gordon was limited to 12 games (all starts), but still had an incredible season. In just 12 games, he rushed for 885 yards and 10 touchdowns. His play was good enough for him to be named to his second career Pro Bowl. His 490 receiving yards that year (a career-high) gave him 1,375 all-purpose yards, and his third consecutive 1,300+ all-purpose season.

After a down season in 2019, Gordon signed with the Denver Broncos. Again, he made an immediate impact, appearing in 15 games (10 starts). On a Broncos team that struggled for much of the season, Gordon provided the team with some bright moments, rushing for 986 yards and nine touchdowns.

Thus far in 2021, Gordon has 332 rushing yards and is on pace for yet another 900-yard season on the ground. As this is the final year of his deal with the Broncos, teams and fans will be monitoring his performance closely. There is no doubt that Gordon could be a valuable contributor to any team that he is on. We here at Mayfield Sports Marketing are proud to continue our partnership with Melvin Gordon and are thrilled to see him continuing to succeed on the highest level.

Mayfield Sports Marketing has earned a reputation of being the one to call for booking top athletes to speak at events and trade shows. To learn more about Melvin Gordon appearance cost and booking fee, please call us today.