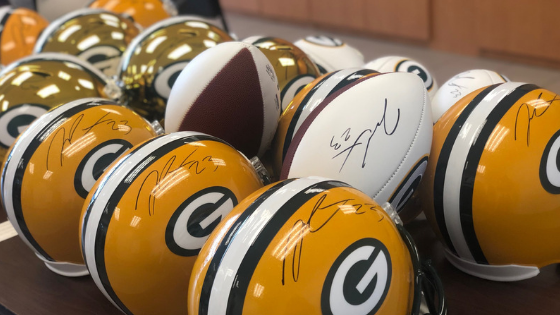 Mayfield Sports once again teamed up with Gross Motors to give local Packer fans a chance to meet one of their favorites. Cornerback Jaire Alexander talked with fans, signed autographs, and posed for pictures as part of Gross Motors of Marshfield’s Customer Appreciation Celebration.

“Jaire, with his personality, is always fun to be around,” shared Mark Mayfield, owner of Mayfield Sports, “and anytime you can bring a first-round pick, having the season Jaire had last year to meet the fans is going to be a blast. Mike and Jodi do a great job of hosting these events and we’re always excited when we can get things like this scheduled.”

Debuting against the Chicago Bears in the  Green Bay Packer’s season-opener, Jaire posted three solo tackles during the Packer’s 24-23 win. He earned his first half-sack the following week during the teams tie with the  Minnesota Vikings and his first career interception in week four in a game the Packer’s easily won 22-0 against the Buffalo Bills.

In total, Alexander finished the 2018 season with 11 starts, one quarterback hit along with a half-sack, 11 pass breakups, one interception, three tackles that resulted in lost yardage, and 66 total tackles. He led the Packers in defended passes while finishing second in total tackles behind Blake Martinez and being recognized by Pro Football Focus as the NFL cornerback with the highest percentage of contested passes during the 2018 season.

Teaming Up With Gross Motors

Gross Motors Auto Group has been meeting the automotive needs of central Wisconsin since 1956 as GM’s top-ranked dealer in Wisconsin. With dealerships in Neillsville, Marshfield, Black River Falls, and Spencer they frequently partner with Mayfield Sports in bringing current and alumni Packer players including Gilbert Brown, Josh Jones, and now Jaire Alexander to central Wisconsin to meet fans.

Ready to bring sports fans into your business? Contact Mark at 262-366-8188 today to schedule a celebrity athlete event with one of our many current or retired NFL, NBA, and MLB players. From speaking events, autograph sessions, and player appearances we have a booking and player to meet your needs.