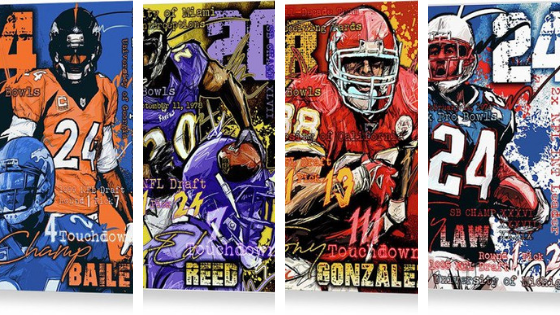 The Pro Football Hall of Fame has once again added to its elite membership, enshrining 17 new members earlier this month. Many fans will be looking for a special way to commemorate their favorite player joining the ranks of the football gods and Mayfield Sports has answered the call with these licensed Hall of Fame canvas prints. The quantities are limited and can be purchased by calling Mark Mayfield at 262-366-8188.

One of the best defensive players in NFL history and a member of the Denver Broncos 50th Anniversary team, Champ Bailey redefined the cornerback position in the modern era. With 908 tackles and 52 interceptions (four of which were returned for touchdowns), Bailey was selected to the Hall on his first ballot.

A three-time first-team All-Pro and 12 time Pro Bowler, Bailey currently ranks 26th on the all-time NFL interception list. He played in 11 playoff games with the Broncos and helped them reach Super Bowl XLVIII in his final season.

The 2004 NFL Defensive Player of the Year, Baltimore Raven Ed Reed joins the HOF on his first ballot, and it’s easy to see why. The list of accomplishments in his twelve-year NFL career is lengthy: Pro Bowl nine times, first-team All-Pro five times, Super Bowl XLVII champion. Reed was an integral part of a Ravens defensive unit that was the best in the league for nearly a decade.

With 64 career interceptions, Reed currently sits number seven all time, and he is tied for 11th place on the NFL’s career pick-six list. Reed is the second Ravens defensive player in as many years to be inducted after Ray Lewis went in last year.

Fans of the Kansas City Chiefs and the Atlanta Falcons know that, without question, Tony Gonzalez is the best tight end ever to play the game. There is no other tight end in NFL history with more receiving yardage or total catches than Gonzalez. When he finished his career at age 37, he had amassed 1,325 receptions resulting in 15,127 receiving yards and 111 touchdowns.

In the NFL’s record books, Gonzalez currently ranks #8 in receiving touchdowns, #6 in receiving yardage, and #2 (behind the great Jerry Rice) in total receptions. Not bad for a two-sport athlete out of Berkeley (yes, in addition to playing football, he led Cal to a Sweet Sixteen berth in the NCAA basketball tournament)!

The third time’s the charm for New England Patriots defensive standout, Ty Law. During a ten year career with the Patriots, Law helped the team go to four Super Bowls and walked away with a ring three times. Law currently ranks #24 on the NFL’s all-time interception list and #11 on the pick-six list.

After finishing his career with the Jets, Chiefs, and Broncos, Law’s final career stat line includes 53 interceptions with seven returned for touchdowns, 838 tackles, five sacks, and five fumble recoveries. His interception for a touchdown in Super Bowl XXXVI remains one of the greatest moments in Patriots football history.