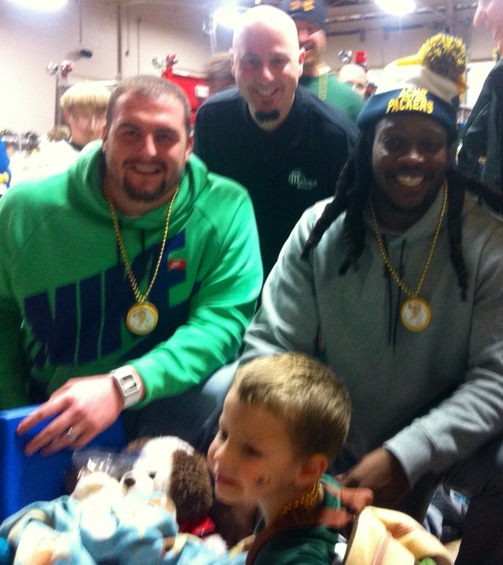 Levi Beastle is a young Wisconsin 3-year old who was involved in a tragic lawn mower accident resulting in amputation of three toes and part of his foot. He has been through 11 surgeries in two months and more will be needed.

Packers offensive lineman Don Barclay and safety jerron McMillian have thrown their support behind Levi’s cause and will appear at a fund-raising event this Saturday, November 2nd at the Newburgh Fire Station in Newburgh, Wisconsin.

On September 3rd Levi was involved in a lawn mower accident at home in Town of West Bend, he was attend to by the Allenton Fire Department who subsequently sent him by Flight for Life to Children’s Hospital of Wisconsin. There his three small toes and a segment of the side of his right foot were amputated due to the significant amount of damage and the great concern for infection that could lead to further amputation. Five days later his great grandmother and aunt were killed in a head on collision on highway 16 near Oconomowoc Wi. Levi spent 30 days in Children’s Hospital with 11 surgeries to clean the wound sites and 1 surgery to transfer muscle from his back, skin grafts from his thigh and closure to the top of his foot.

On October 3rd he was discharged from Children’s Hospital still on IV antibiotics just in time to attend his mother and fathers wedding held on October 5. His mother, father, grandmother and grandfather were trained to attend to the IV infusions, wound dressing and pain drug administration, of which he remains on for an additional 3 weeks to date.  Subsequent known surgeries will include 3 pin removal from his foot and tendon relocation from the left side of his foot to the right side to allow straightening of the foot due to the loss of those lost in the accident, it is still unknown how much rehabilitation, prosthetics or assisting devices will be required to try to return him to his new normal state of mobility.

Although Levis prognosis for his foot remains unknown he has continued to have his great personality, sense of humor and adventure that all 3 1/2 years olds have unaware of what the future has in store for his subsequent surgical procedures to maximize the functionality and usefulness of his right foot. He often asks about the foot and his missing toes but does not want to look at or show anyone the damage that he has sustained.

We cannot praise enough the Allenton Fire Department for their quick response to the accident, Flight for Life and its staff, Children’s Hospital of Wisconsin, Dr. Lyon Orthopedic Surgeon, Dr. LeGudice Plastic Surgeon and the many family and friends who have been there to support our family during this traumatic event. A fund raiser has been set up at the Newburg Fire Department on Saturday,November 2ND starting at noon until…………..

Come and meet Green Bay Packer Don Barclay, The Ultimate Packer Fan’s and other guests soon to be announced.

Visit www.levischallenge.com for details and donations. Thank you

This site uses Akismet to reduce spam. Learn how your comment data is processed.